Analysis of the application of PCB in server field

Printed circuit boards (PCB for short) mainly provide electrical connection for electronic components, also known as the "mother of electronic system products". From the perspective of industry chain, PCB is mainly used in communication equipment, computer and peripheral, consumer electronics, automotive electronics, national defense, military and other electronic equipment fields. With the development and maturity of cloud computing, 5G, AI and other new generation of information technologies, the global data traffic will continue to show a high growth trend. With the explosive growth of data volume and the trend of data cloud transfer, the server PCB industry has a very broad development prospect. 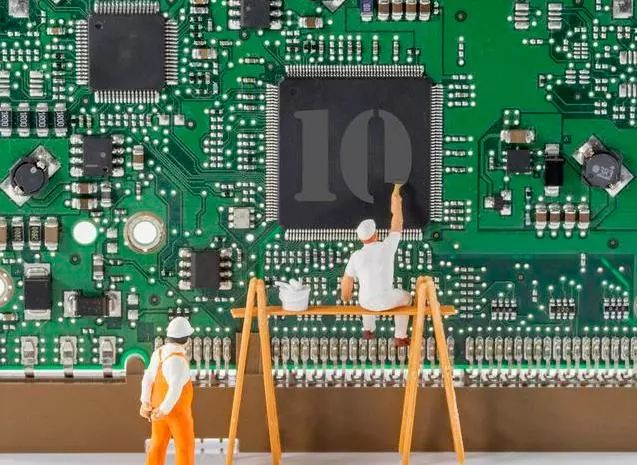 According to IDC statistics, from 2014 to 2019, the global server shipments and sales amount rose steadily. In 2018, the industry prosperity was relatively high, with shipments and shipments reaching 11.79 million and 88.816 billion US dollars respectively, up 15.82% and 32.77% year on year, showing both volume and price rising. The growth rate in 2019 is relatively lower, but it is still at a historically high level. From 2014 to 2019, China's server industry has developed rapidly, growing faster than the rest of the world. In 2019, the shipment volume declined relatively, but the sales amount increased relative to the same year. The internal structure of the product changed, the average unit price increased, and the proportion of high-end server sales showed a rising trend. 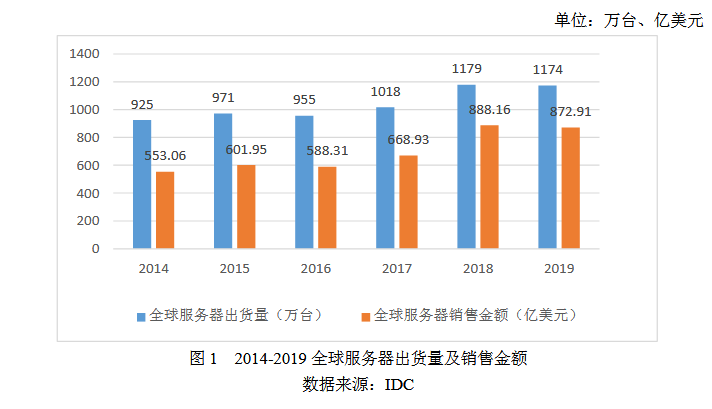 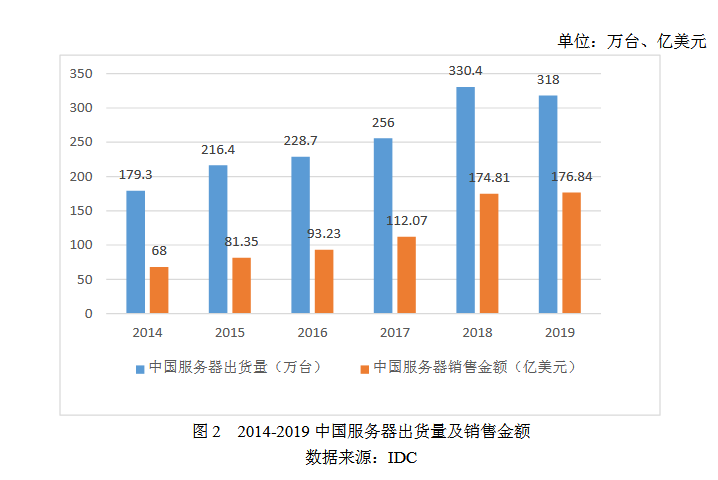 2).  Comparison of major server companies According to the latest survey data released by IDC, in 2020 Q2 global server market independent design enterprises still occupy the main share, the top five sales are HPE/ Xinhua 3, Dell, Inwave, IBM, Lenovo, the market share is 14.9%, 13.9%, 10.5%, 6.1%, 6.0%. In addition, ODM manufacturers accounted for 28.8% of the market share, a year-on-year growth of 63.4%, has become the main choice of small and medium-sized cloud computing companies server processing.

In 2020, the global market will be affected by the new epidemic, and the global economy will decline relatively significantly. Enterprises mostly adopt the online/cloud office mode, and still maintain a high demand for servers. Q1 and Q2 maintain a high growth rate compared with other industries, but it is still lower than the data of the same period in previous years. Data center demand was the main driver of global server demand in the second quarter, with North American cloud operators being the most active, according to DRAMeXchange. In particular, order demand, which had been dampened by the turbulence in Sino-US relations last year, showed a significant tendency to replenish inventory in the first quarter of this year, leading to relatively strong server growth in the first half of this year.

In the Q1 of 2020, the top five manufacturers in China server market sales are Inwave, Xinhua III, Huawei, Dell and Lenovo, with market shares of 37.6%, 15.5%, 14.9%, 10.1% and 7.2% respectively. The overall market shipments basically remain stable, and sales maintain steady growth. On the one hand, the domestic economy recovered rapidly, and the new infrastructure plan was gradually carried out in the second quarter, resulting in a large demand for infrastructure such as servers. On the other hand, the demand of super-large-scale customers has increased substantially. For example, Alibaba is benefiting from the new retail business Hema 618 Shopping Festival and the rapid growth of Bytedance Tik Tok, etc., the domestic server demand is expected to maintain a rapid growth in the next five years.

The continuous growth of server demand and structural upgrading will drive the entire server industry into an upward cycle. As a key material for server operation, PCB has a broad prospect of both volume and price increase driven by the upward cycle of server and platform upgrading and development.

From the perspective of material structure to subdivide, the main components of the server involving the PCB board include CPU, memory, hard disk, hard disk backboard and so on. The PCB board used is mainly 8-16 layer, 6-layer, packaging substrate, 18-layer and above, 4-layer and soft board. With the transformation and development of the overall digital structure of the server in the future, the PCB board will show the trend of high-rise plate, 8-18 layer, 12-14 layer and 12-18 layer will be the mainstream material of the future server PCB board. 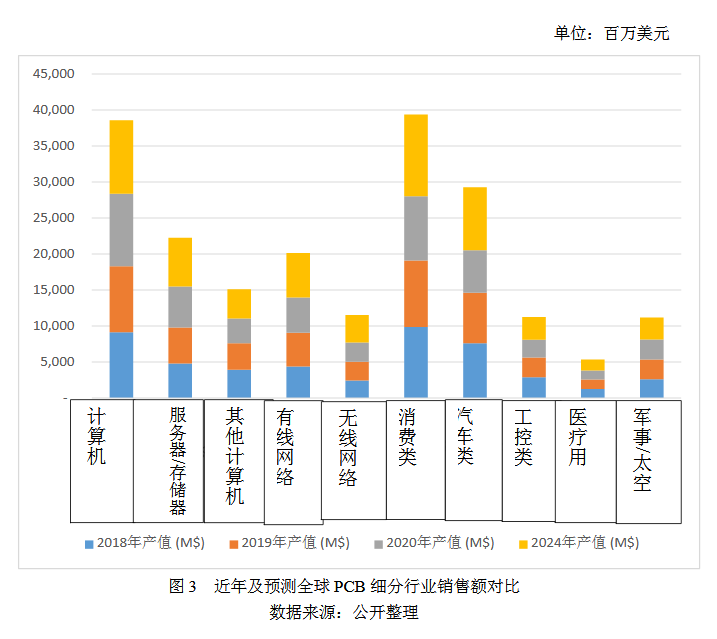 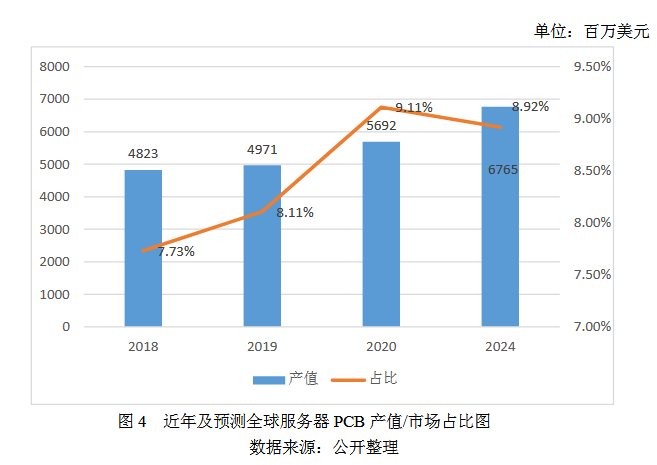 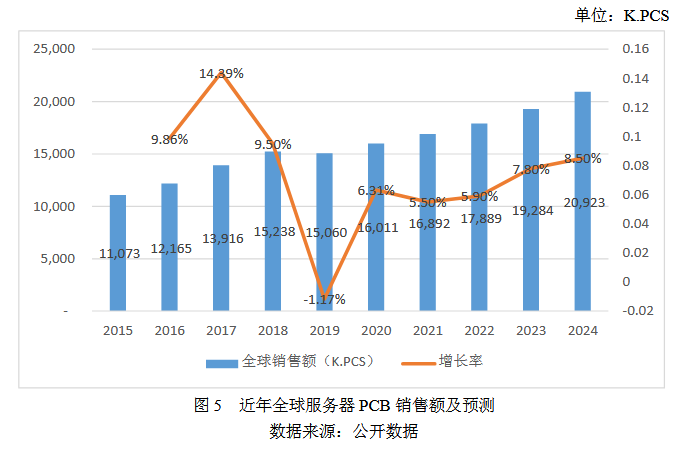 In the future, with the development and maturity of cloud computing, 5G, AI and other new generation of information technologies, global data traffic will continue to show a high growth trend, and global server equipment and services will continue to maintain a high demand. As an important material for servers, PCB is expected to continue to grow rapidly in the future. In particular, the domestic server PCB industry has a very broad development prospect under the background of economic structural transformation and upgrading and domestically produced replacement.